Reposted with permission from CCV District Museum 4/6/2010
***For immediate release
Contact: Features Editor Mark Boardman, True West Magazine, 765-491-4063 / mboardman@twmag.com
Director Jan Collins, Cripple Creek District Museum, 719-689-2634/CCDMuseum@aol.com
Cripple Creek District Museum Makes Top Ten in True West Magazine
The Cripple Creek District Museum is pleased to announce the honor of making True West magazine’s Top 10 Western Museums of 2010!
The Museum rated #9 on the list, right after Boot Hill Museum in Dodge City, Kansas. In Colorado, the Buffalo Bill Museum and Grave in Golden was rated #3, and New Mexico History Museum in Santa Fe took top honors. “We are so incredibly pleased to have been chosen for the list.” said Director Jan Collins. “This is a pretty big deal for our little museum.”
True West writer Johnny D. Boggs cited the Museum’s acquisition of two historic cabins as a part of his selection process. The cabins were relocated to the Museum grounds last fall. Both have been furnished to reflect when they were occupied by a typical boomtown miner and retired prostitute French Blanche LeCoq, respectively. “Cripple Creek is a legendary Old West mining town,” True West Executive Editor Bob Boze Bell said in a recent press release from the magazine, “and the Cripple Creek District Museum does an outstanding job of telling its story and preserving its history.”
All of the winners of this year’s Top 10 Museums List will be featured in True West’s May 2010 issue, on newsstands April 20. The Museum also has an advertisement in the magazine’s official Road Trip issue for April, which is currently on sale. “I’d like to thank True West and its editors for bestowing this honor and recognition upon us,” said Collins.
The Museum is open Saturdays and Sundays from 10 a.m. to 4 p.m. Beginning Saturday May 15, the Museum will open for the summer from 10 a.m. to 5 p.m. seven days a week. In honor of Historic Preservation month, admission to the Museum that day will be free. For more information on group rates or special tours, call 719-689-2634 or email CCDMuseum@aol.com
For more information or to subscribe to True West magazine, visit www.twmag.com or call 888-687-1881.
For more info contact Carrie! 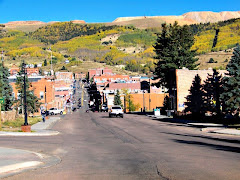